When the closing poll flashed on the screen, the looks of despair glared through my computer screen. “How confident are you that racism will end in our lifetimes?” Turns out, the Essential Class of 42 wasn’t very confident. In fact, more than 50% of us didn’t believe it was possible while a small majority believed there was a slight possibility. As the eternal optimist in the group who does believe racism will end sooner rather than later, I posed a question to my colleagues, “what would the world actually look like if we didn’t have racism? Do you have a vision for that future?” Not surprisingly, many, if not most people in our class did not have a clear vision of what our world could look like without racism. I pushed further, “if you don’t know what the world would look like without racism, how will we ever be able to dismantle it?” I personally have lots of thoughts on what our world would look like without racism, however, before I share, I want to take us back to the beginning of this story.

For our November class, we had the pleasure of spending two days with one of the most renowned racial equity facilitators in the world, Mr. Glenn Singleton. For over 30 years, Mr. Singleton has taught hundreds of thousands of people how to engage in sustained and deepened dialogue on race using the Courageous Conversations protocol and framework as well as the Beyond Diversity™ curriculum. As a cohort, we unpacked the impact of racism across the globe; debated the definition of racism and its relationship to power and whiteness; as well as engaged in dialogue about white fragility and anti-Blackness. Needless to say, two days was not enough time. And, it was very clear to me, we have more work to do.

One of the goals of participating in the Essential Class, the flagship Leadership Austin program, is for alumni to increase their impact through civic engagement in our community. Leadership Austin understands that its alumni cannot meet this goal without having a deep understanding of how racism operates in our society. This month’s class was just the beginning for some and the continuation of the journey for others. For me, I’ve been on this journey for a while and I have spent some time pondering the future I want for myself, my children and my community including what that future looks like without racism. While the vision I have is far more complex to spell out in a short blog post, I’ll share a few of my ideas. First, no one’s life circumstance would be predicted by “race” such as the likelihood to die at childbirth, be incarcerated, or one’s ability to accumulate wealth. In fact, the concept of “race” would be null because it would not have power. “Race” would be something we study in history books next to ideas so as “the world is flat.” In addition, empathy would reign over rugged individualism. I could go on and on but I am not. Instead, I’m going to put the onus on you dear reader. If you do not have a vision for what your life or community could look like without racism, I encourage you to spend some time developing one. Here are a few tips to get you started.

First, you need a deep understanding of how race and racism was constructed over the last 400+ plus years. A few good resources are the Scene on Radio: Seeing White podcast or the 1619 Project by the New York Times.

Second, gain insight into what the world could be like without racism by exploring the unique culture and history of our indigenous ancestors both in the United States of America and around the globe. Before they were subjected to conquest, colonialization and genocide, our indigenous ancestors lived in a world absent of racism. A great place to start is the website, Illuminatives.org.

Despair will not help us in the fight to end racism. Hope will. Racism was created and therefore it CAN be destroyed but it will take all of us. Are you in?

About the Author: Dr. Choquette Hamilton 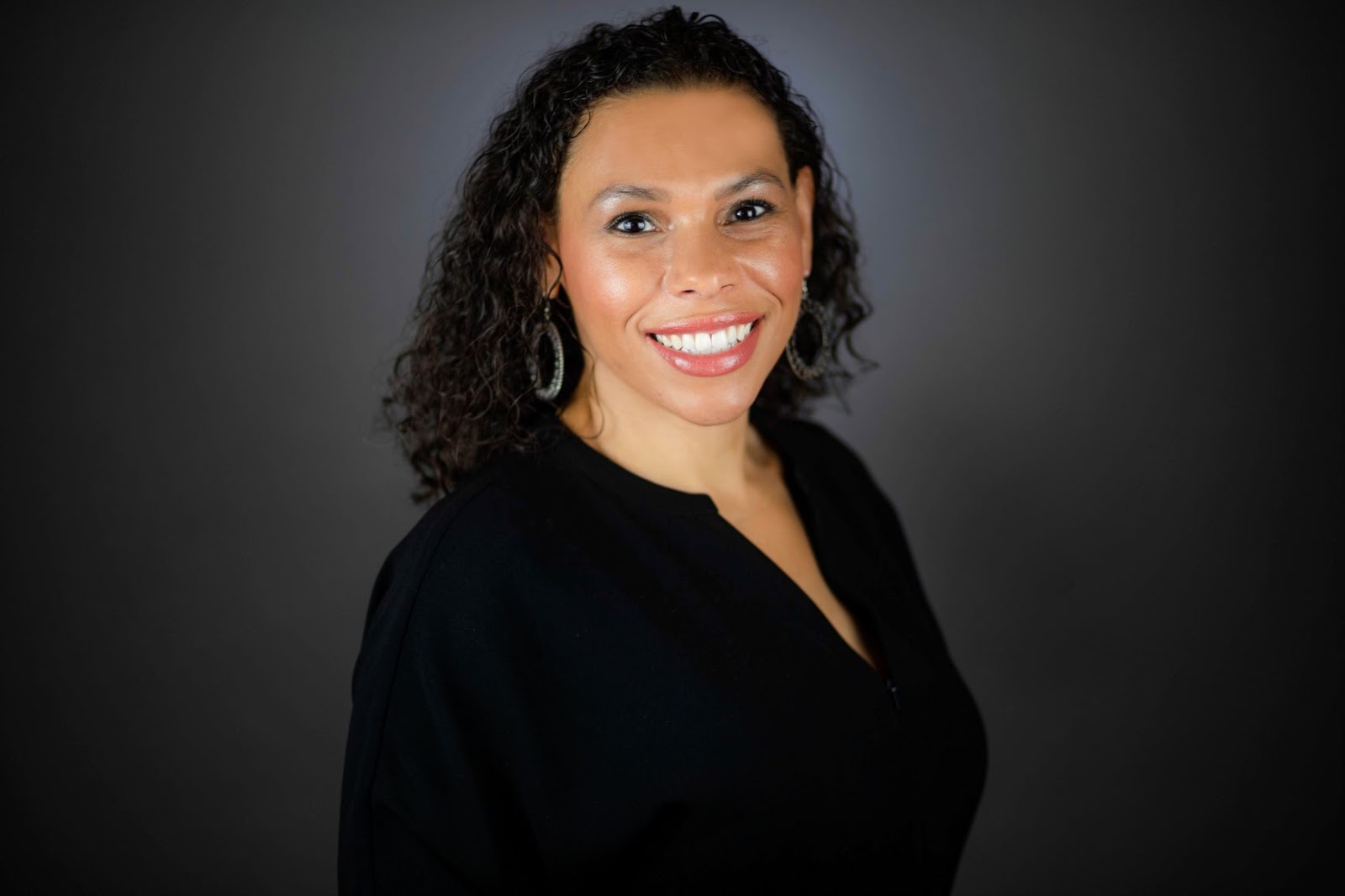 Dr. Choquette Hamilton is Founder and CEO of RISE Child Development Center, Inc., an anti-racist organization created to dismantle inequity in early childhood education. In addition, she is the Co-Founder of REAL Solutions Consulting and Coaching. REAL Solutions is a firm committed to increasing an organization’s and individual’s capacity to foster Restoration, Equity, Anti-Racism and Liberation through training, coaching and strategic planning.

Prior to founding RISE and REAL Solutions, Dr. Hamilton served as the Managing Director of Culture, Diversity and Organizational Effectiveness for KIPP Texas Public Schools, Chief Operating Officer for KIPP Austin Public Schools (KAPS), Vice President of Operations for the Austin Area Urban League (AAUL) and in various capacities at the University of Texas at Austin. Most proudly, Dr. Hamilton taught 7th grade Language Arts and Social Studies as a Teach for America corps member in Philadelphia.

In her spare time, Dr. Hamilton likes to hang out with her Husband, Greg and two sons, Gregory (age 9) and William (age 7). 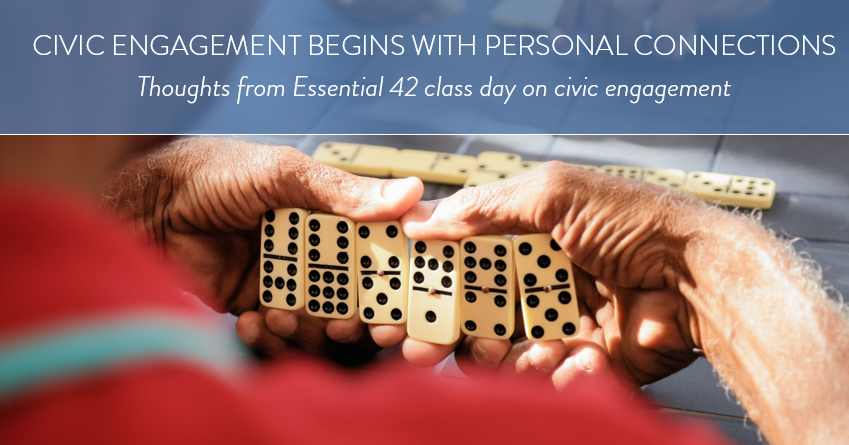 Here we stand at the precipice. All the problems of today are overwhelming, COVID-19, violence towards Black Americans, our profoundly damaged environment, poverty, the list goes on and on. It’s no wonder some feel motivated to fix it – any of it, all of it. We want to apply a salve of immediate action to our fear and anger. We want to release our love and hope in healing bursts of quantifiable action.

October’s Essential Class session on demographics and civic engagement challenged us to think smaller. It reminded us that though we all want to change the world, the world starts right outside your own front door. We heard from Ricardo Zavala, Dove Springs Proud founder and president, and Austin City Council Member Natasha Harper-Madison. Both shared how the need they saw around them, their connection and shared lived experiences with their communities informs their leadership.

As we learned about the profound impact Dove Springs Proud has on individuals and the community at-large, I wondered how to get involved without overstepping. How do I help without imposing? Ricardo graciously suggested reaching out to established neighborhood leaders and doing so ready to listen. Council Member Harper-Madison shared that she started her public service journey by going door to door in her neighborhood and asking, “What do you need and how can I help you?”  These community leaders lead through curiosity.  They lead by listening.

Well-meaning people pour their energy into fixing things. Seeing a need from 10,000 feet, they dive in with all the answers. But answers to what? What is the problem? What is the need? What is already being done to address it? Who are the people that are or will be impacted? And not just who are they demographically, but who are they? What are their stories? What are their deepest needs and who do they trust?

Albert Einstein said, “If I had an hour to solve a problem, I'd spend 55 minutes thinking about the problem and 5 minutes thinking about solutions.” If we want to provide solutions, we must first gather both quantitative and qualitative data. We must ask questions, listen openly to the answers, believe people when they share their experiences, play dominoes, loan a cup of sugar, ask for a cup of sugar, laugh together, and witness need and pain. We must have patience and courage to press in with curiosity, rather than quickly offering a “solution” that may do more harm than good. Only after we have personally or proximately experienced the pain, gained clarity about the complex landscape, can we begin to think about solutions.

So, take a deep breath, pack your patience, and wade in with care and compassion as you open your eyes and heart to the needs of our community. Spend a disproportionate amount of time and energy defining the problem before trying to solve it. Use your energy and enthusiasm to build real connections and listen. You may just find you’ll learn something about yourself too. 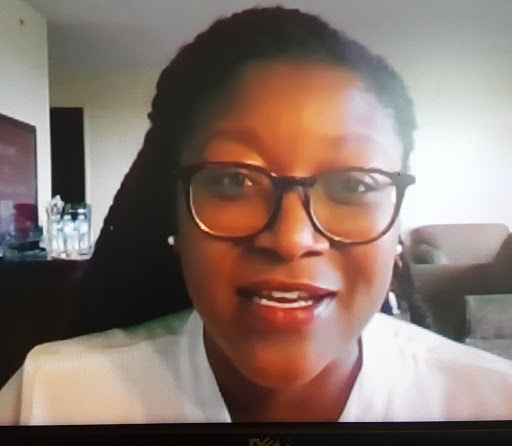 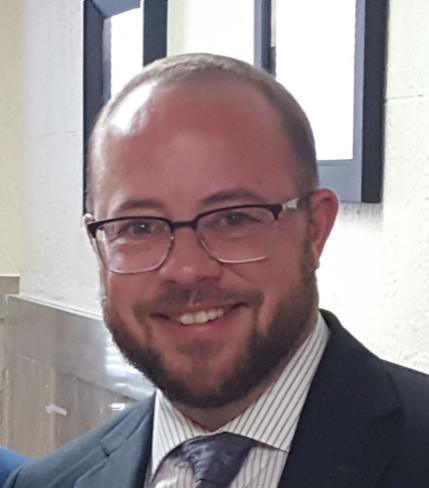 Drew serves his community in both his professional and personal lives.  Professionally, Drew leads a team in the Travis County Attorney’s Office civil enforcement division.  Before becoming an attorney, Drew taught English and coached.  Now, he merges those worlds as an Adjunct Professor at the University of Texas School of Law.

Drew serves on the boards of the Travis County Democratic Party, Capital Area Progressive Democrats, Austin LGBTQ Bar Association, and the Downtown Austin Community Court Advisory Board, and is a co-founded Southeast Democratic Alliance which focuses on connecting the historically underrepresented Southeast Austin/Travis County residents with community resources and their elected officials to foster civic engagement.

We suggest moving this party over to a full size window.
You'll enjoy it way more.
Close
Go Fullscreen